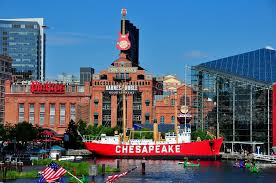 “Crab cakes and football. That’s what Maryland does!” Truer words are seldom spoken. That legendary one-liner has to be the greatest cinematic shoutouts to the freestate in Hollyweird history. The memorable scene from Wedding Crashers only felt more authentic considering the amount of boat shoes, button downs and mint juleps included in a scene for a friendly game of backyard football. In retrospect, Maryland does a few other humankind’s greatest achievements quite well. We brew a few fine craft beers, know a thing or two about how to navigate traffic circles and also have one of the highest concentrations of luthiers in the world. In this post we’ll explore what it is about Maryland that makes it such fertile breeding ground for guitar builders and repair folks.

!dea viruses spread rapidly
In the 1980’s a young man named Paul decided he was going to build a guitar in woodshop class. That’s when the luthiery virus landed on the shores of Annapolis. At the time there were two major guitar manufactures, Gibson and Fender. Paul – the curious guitar nerd he is – decides to combine the best aspects of both brands into one super guitar. The custom 24 is born and musicians across the world slowly start noticing the instruments being born by the bay. While frankenstein-ing his amazing hybrid creation Paul becomes known in the area as a reputable guitar guy and takes on challenging repairs and mods learning what to do and more importantly what not to do while building a quality guitar. Bird inlays are cut out and the groundwork for future luthiers in Maryland is laid.

Soon the idea virus spreads and other interested enthusiasts who notice what’s happening in Annapolis. They ask themselves “If that guy can do it, why can’t I?” <—crux of the idea virus. Shops opened up, garages started filling with tools and a small cloud of maple and mahogany sawdust began to form around the surrounding counties. The virus reaches a new level of infection and before you know it everyone from Ocean City to Deep Creek Lake knows a guy with their own line of guitars. An alphabet soup of brands fills the state. TTD Guitars, MDD Guitars, BTH Guitars, PBJ Guitars all with varying degrees of quality each following in the footsteps of the person who has walked the path before them not knowing that this path only leads to a mirage. Eventually, a luthier must begin to blaze their own trail in order to succeed in an industry where intellectual property rights are nonexistent and ferrel copy cats run wild. Each offering up a special secret sauce as to why their instruments are better than the guys next door.  The virus slowly starts to claim its first causalities.

Thirty-three years after that West Street shop opened up in Annapolis, the luthier bug is in full domino effect mode. One guy opens up a shop, then another and another. At this point there is no excuse for any guitar player in Maryland to be jamming on something that’s not set up correctly. Every time someone pops a string, a new repair shop opens. Lots of luthiers got their start at Pauls big factory –  now on Kent Island – and like spores falling off the host mushroom, take root in the surrounding counties speckling the Chesapeake Bay watershed with bone dust and bandsaws. So this begs the question, What was it about Pauls shop that lead to their success? A few things. Quality instruments, definitely. Endorsements, you betcha. Smart business decisions, oh yeah. Talent, hard work and tenacity for perfection, couldn’t have said it better myself. But, there are a few other factors that lead to this lighting in a bottle circumstance. One of them, investors. Yes, it’s true. Cash flow is the wind in the sales of a small business. Without cash a business is stuck in the bay going nowhere fast. At the whim of the tides waiting for the brackish water to carry it out to the Atlantic. Some of those early endorsers were also investors. It’s a smart move and quite the compliment to the builder. “Not only will I play your guitars, here’s a big ol’ check to build a few hundred more. Pay me back later.” Yes please! Another big reason for his success, the mysterious factor out of our control that has the ability to take a business to the next level when positioned in the right place at the right…time. The 80’s were a hot decade for the electric guit-fiddle. Video killed the radio star and big hair and spandex were cool beans dude. Every guy wanted to be on stage in front of Marshall stacks dive bombing the shit out of a Floyd Rose. If the 60’s-70’s were the hayday for the electric guitar the 80’s were prime years. The market was ripe for a new brand of sleek, sexy, handcrafted, boutique instruments. Paul caught the wave peek crest on 146th street and rode that sucker all the way down to the inlet. Woo-wee what a ride!

From the Land of Pleasant Living
Marylanders are full of pride. The cheesy, theme park-esk name fits the bill perfectly. It’s a great place to live. We have it all. Two major metropolitan areas surrounded by beautiful countrysides and everything within a quick drive. Just be sure to avoid the beltways during rush hour. We’ve got sandy beaches packed with plenty of iconic hot spots out east and the amazing cascading Appalachian mountain range towards the western half of the state. If you’re born here, you’re staying close. When someone asks “Where did you go to school?” they’re asking about high school and odds are they know someone in your graduating class. Having pride in your hometown is common but people from Maryland really love being from Maryland.

Besides the scenery what makes this place great state is a diverse economy. Lots of jobs in Maryland are provided in part by the federal government. There are jobs working directly for the government inside the DC beltway and even more positions with government contractors in areas surrounding the capital.  Biotech, healthcare, computer science/engineering and the military offer lots of well-paying jobs.

So what does a healthy economy have to do with building guitars? At its basic level luthiery is fine woodworking and woodworking can get very, very, expensive. Considering trees grow pretty cheep provided they have plenty of sunlight and rain, the tools used to turn them into tables, chairs, spice racks, bird houses and guitars are not cheep. Ask any woodworker and they will tell you the more precise (and expensive) the tool used are the finer the end results will be and quality is the ONLY thing that matters in guitar building.

Lots of well paying jobs means disposable income for tools, machines and most impotently, pretty wood. Maryland’s stable economy means it’s fertile ground for setting up a small business. We’re crammed in pretty tight in the Baltimore/DC corridor which means a larger group of people who potentially need repairs and who definitely need a custom handcrafted axe to add to the collection. Population density translates into a high number of customers. There is lots of spruce and alder in Alaska so there must be a few builders bordering the arctic circle but not nearly as many as the mid-Atlantic. As the old adage goes location, location, location.

Luthiery is for Lovers
When it comes to creating, the more effort invested the greater satisfaction received once a  project is complete. Deciding to build an instrument is a big commitment. Deciding to build more then one is crazy. Simply put to those bitten by the bug there is no better way to spend time, effort and attention on than finishing a project. With so much to learn and explore in a craft like luthiery, it’s inevitable that a majority of those who manage to finish their first build relatively unscathed will go on to build a second, third and fourth. By the time the 60th build comes across the bench, justifying the cost of a CNC starts to become a whole lot easier. The craft has a snowball effect or perhaps more accurately a spiral effect on those who answer the call. Maryland builders know that feeling well.

Just ask guys like Joe Knaggs and the team at Knaggs guitars on the Eastern Shore. Or head west and meet with Jason Ingrodi who has been busy busting out builds in the lush, green Appalachian mountains of Maryland, Matt Schmill of FBB Bassworks in the heart of Baltimore, Malinoski Guitars, Rushmore Guitars (carving guitars out of one piece of wood) of Annapolis or Chris Stenger of Stenger Guitars building handcrafted tele’s and Les Pauls in Montgomery County. If acoustics are more your jam Maryland has Dave Maccubbin of Maccubbin Guitars who has been building amazing flat top steel string guitars in his home shop for years and Paul Beard of Beard Resophonic Guitars who has really made a splash in the bluegrass scene building some world class instruments. Lots of people dream of building guitars day in and out and these craftspeople are living it.

If you’ve ever visited the inner harbor of Baltimore, it’s hard to miss the giant PRS guitar strapped to  the smoke stakes of the old Pratt Street Power Plant. It once marked the location of the Hard Rock Cafe Baltimore but years after the restaurant has shut down the guitar now stands as a staple in the city skyline. Every time I see that guitar it fills me with pride and gratitude knowing some of the worlds best guitars are built right here in my home state. The repair guy in me would really love to see all the landmarks fluorescent lights switch on at night (only three strings light up) but I’m much too busy handling the work on the bench now to worry about petitioning city officials to spend resources changing a few giant lightbulbs. Besides I think P.R Smith himself would have easier access and be much more effective at pulling the strings of city officials. Get it fixed Paul!

Luthiers are everywhere now. If you’re not one yourself, I’ll bet you a fresh fractured prune donut you know one and don’t even realize. There is something about Maryland that inspires passionate people to build the tools musicians use for their craft. I’ve always thought of luthiery is creativity squared. The instrument inspires the musician who’s music inspires the audience. As guitar builders, I believe we’re inspired by the craft, the wood, music and each other to continue creating. For luthiers of Maryland, the close proximity we share may also add to the equation.

Building a guitar is a major undertaking. There are a lot of lessons to learn along the way and at the end of the process the abilities and skills of the builder are on full display. At times the process can be frustrating but one of the lessons this craft instills in a person is the joy of problem solving and personal improvement along the way. Making something from scratch by hand is a transformative experience. If building an instrument sounds like something you are interested in pursuing, do it. -SB 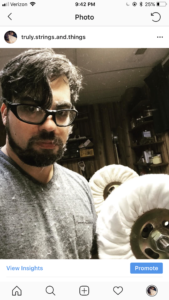